Thursday of Second Week of Lent/ Preparing for Sunday 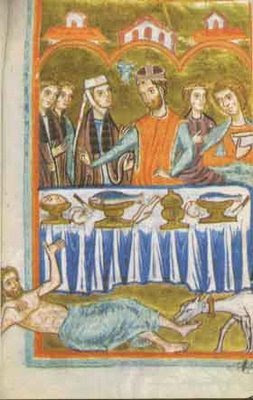 Today's Gospel deserves a reflection before we turn to Sunday. Jesus tells the Pharisees about the rich man who dined sumptuously each day; and he tells them about the poor man named Lazarus, who would gladly have eaten the scraps thrown to the dogs. Lazarus dies and is carried away by angels to the bosom of Abraham. The rich man also died but went to the netherworld and was in torment. He cried out and desired to have Lazarus come to cool his tongue with a drop of water. Abraham told his that he had received what was good during his lifetime and now there was a great chasm to prevent anyone from crossing. Then the rich man wanted his five brothers to be warned. Abraham told him, "If they will not listen to Moses and the prophets, neither will they be persuaded if someone should rise from the dead." There is a lesson in this story for all of us. Who are those at our door who need our help now?

Let us look at the Gospel for the Third Sunday of Lent. Jesus went up to Jerusalem since the Passover of the Jews was near. He went to the temple and then we have a scene that seems so different from all the others scenes of Jesus: "He found in the temple area those who sold oxen, sheep, and doves, as well as the money changers seated there. He made a whip of cords and drove them all out of the temple area, with the sheep and oxen, and spilled the coins of the money changers and over-turned their tables,and to those who sold doves he said, 'Take these out of here, and stop making my Father's house a marketplace.' His disciples recalled the words of Scripture, Zeal for your house will consume me. At this the Jews answered and said to him, 'What sign can you show us for doing this?' Jesus answered and said to them, 'Destroy this temple and in three days I will raise it up.'...when he was raised from the dead, his disciples remembered that he had said this, and they came to believe the Scripture and the word Jesus had spoken...." I have not copied all of it as John also tells us how many began to believe in his name, "but Jesus would not trust himself to them because he knew them all..."

Are we comfortable with the image of Jesus in Sunday's Gospel? This is the same compassionate Jesus who has been healing and blessing all; now we see his anger. Jesus is human and like us in all things except sin. He shows very human emotions!

This is a gospel that challenges us to look at what Jesus might want to drive out or overturn in us. Let us invite Jesus to cleanse our lives of anything that needs to be banished from our hearts and lives. Lent is the time to do some serious thinking about what needs to be changed in our own lives!
Posted by Helen at 3:47 AM