St. Augustine, Bishop and Doctor of the Church 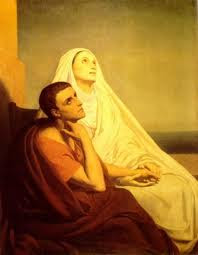 I am repeating the image of Augustine with his mother as this is the only one I have of Augustine as a younger person. I do not like the pictures where he is shown as an old and rather stuffy-looking Bishop. I think of him as being so dynamic that he really wanted his friends around him and gathered his priests to live together to be friends and support one another and so the Augustinians became a religious order in the Church and their rule of life was the one used by many other founders of religious orders.
Augustine was born in North Africa in 354; he had a mistress who bore him a son, Adeodatus. Later, in Milan, Augustine heard St. Ambrose preach and that was the beginning of his conversion. He was baptized in 387 and his mother died that same year and his son just two years later. Augustine was ordained in 391 and became Bishop of Hippo in 396; he spent the rest of his life preaching, writing, and defending the Christian faith against the heresies of his day. He is one of the great doctors of the Church. I guess his best known quote is telling God that our "hearts are restless until they rest in Thee."
Posted by Helen at 4:36 AM