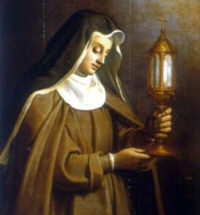 Clare had to leave her home in Assisi secretly to join Francis and become a Franciscan; she was the first woman to be given the Franciscan habit. Soon others joined her including her mother and two of her sisters. Clare was made abbess in 1215 and her nuns were called "Poor Clares" as they practiced radical poverty. Clare died in 1253 and was canonized two years after her death.

Today's Gospel has Jesus first telling his disciples when they asked him who was greatest in the Kingdom of heaven, "whoever becomes humble like this child is the greatest in the Kingdom of heaven."
Jesus then asks his disciples about a shepherd who "had a hundred sheep and one goes astray, will he leave the ninety-nine in the hills and go in search of the stray? And if he finds it, amen I say to you, he rejoices more over it than over the ninety-nine that did not stray."
We know that Jesus is our Good Shepherd and always seeks us whenever we stray!
Posted by Helen at 3:44 AM