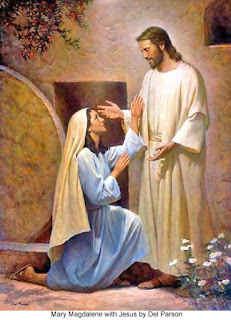 Mary was weeping outside the tomb alone. Then, someone she thinks is the gardener, asks her: "Woman, why are you weeping? Whom do you seek?"  Even when she turns, she does not recognize the risen Jesus. Jesus said to her, "Mary" and that is all she needed to hear. She now rushes towards Jesus, but Jesus has to tell her: "Do not hold me, for I have not yet ascended to the Father." And then Jesus sends her, a woman, to go to the others and bring them joy. And Mary went and told the disciples, "I have seen the Lord."

Of course, Mark will tell us later in his Gospel that they did not believe her, but Peter and John will run to the tomb to see for themselves. And Jesus continues to give joy - I am sure that He first went to His Mother and spent some quiet time with her as soon as He was risen from the dead. I also know that he would appear to Peter before He went looking for his two disciples who had left Jerusalem so sad. But, Evely has only the encounter with Mary Magdalene as his first station of joy.