Tomorrow is the Feast of St. Madeleine Sophie 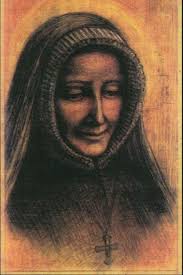 St. Madeleine Sophie founded the Society of the Sacred Heart and became the first Mother General. She governed the Society from its beginnings until her death in 1865. Actually, although she made her vows in 1800 and we count that as a foundation date, she was only elected Superior General after having founded two more houses after the first school in Amiens, France. She was often ill but she was above all a soul of prayer and governed with wisdom as the Society grew and spread. She allowed St. Philippine Duchesne to bring the Society of the Sacred Heart to America in 1818. These two saints held fast to the Constitutions of the Society and kept union among all the houses of the Society. We owe them so much. I love to prepare this feast by having a real conversation with Sophie.