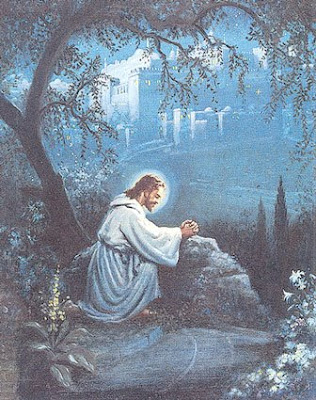 I think Jesus suffered the most in the Agony in the Garden; this was not the physical suffering of being nailed to a cross, but it was a terrible suffering of his whole being that caused him to sweat blood. He struggled in the garden to accept fully the will of his Father. Once he did that, he seems to have been strengthened and goes through the rest of his passion and death with a calmness and a control that is striking. In prayer in the garden he suffered alone; his heart was torn but being in agony he prayed longer and harder. He asked his three closest companions to watch and pray with him, but they went to sleep. He still says to us, "Can you not watch one hour with me?"
Posted by Helen at 3:57 AM