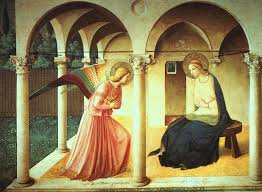 Mary may have been praying when the Angel Gabriel appeared to her. How did she feel? Perhaps she was frightened as the angel's first words are: " Hail full of grace! The Lord is with you." Luke tells us that Mary was greatly troubled and pondered what sort of greeting this might be. Then Gabriel said, "Do not be afraid, Mary, for you have found favor with God." And then comes the rather startling announcement that she will conceive and bear a son and name him Jesus. And if that was not enough to announce, the angel continued to tell her that her son "will be great and will be called Son of the Most High, and the Lord God will give him the throne of David his father and he will rule over the house of Jacob forever, and of his Kingdom there will be no end."
Imagine how Mary felt - bewildered, astonished, confused and maybe scared? She asks how this can be since she has no relations with a man. Then the angel assures her that the "Holy Spirit will come upon you, and the power of the Most High will overshadow you...."  I cannot imagine what Mary made of that, but she is willing to accept. She says, "Behold the handmaid of the Lord. May it be done to me according to your word."

I never get tired of this Gospel where Mary accepts to be the mother of Jesus and now the Mother of all of us!