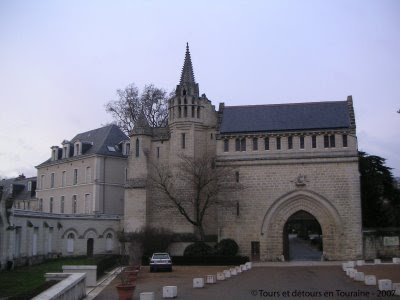 Martin was born in what was then Pannonia, now Hungary. He was a Roman soldier but was baptized a Christian at 18 and realized that he would need to leave military service as it was not compatible with a Christian life. He left the army and settled in Gaul(France)and founded a monastery there. The people of Tours proclaimed him their bishop in 371. He worked to spread the faith and he is the one who divided a diocese into parishes, which is still the way the Church organizes dioceses. The convent of the Sacred Heart and school called Marmoutier has some caves and ruins on the grounds where St. Martin is said to have retired to pray. I think it was the monastery he founded but forget the details. I was awed by the fact that I felt in touch with someone from the 4th century!
I also was able to sleep in the tower room that had been occupied by Saint Madeleine Sophie, foundress of the Society of the Sacred Heart. I think the abbey that is now the school must have been built later but on the original site.
The legend has it that Martin met a beggar who was cold and so he used is sword to give him half of his cloak; the beggar was Jesus and he came to him later and that was whqat changed Martin for life. I do not remember details but liked the story.
Posted by Helen at 4:26 AM