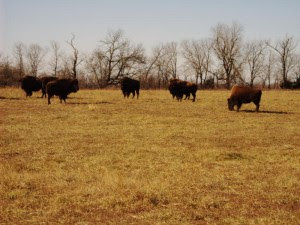 The Jesuits begged for us (the Society of the Sacred Heart)to join their mission with the Potawatomi Indians who had been moved from the Northeast to "Indian Territory" in Kansas. Father de Smet even helped raise some money in order to get permission to take a band of four Religious of the Sacred Heart to Sugar Creek in 1841. He arrived at the City House in St. Louis to finalize plans and realized that Philippine Duchesne was not being included in the group to go to the mission; Philippine was now past seventy and her health was poor. The Jesuits had always know of Philippine's desire to go to the Indians and insisted that she come even if they had to carry her. Actually, when given the permission to go with Lucile Mathevon, Mary Ann O'Conor, and Louise Amyot, Philippine seemed to have new life and the four days on the boat going up the Missouri river rejuvenated her. Another four days of travel on land brought them to the Potawatomi Mission. The Indians had come out to meet them and they had to shake hands with about 500 braves and kiss 700 Indian women before the welcome ceremony ended. The priest at the mission had not expected them so soon and nothing was prepared for them. An Indian vacated his small log cabin and the nuns moved into the tiny room that contained only two chairs. They soon had the four corners designated as kitchen, community room, dormitory, and parlor with the middle of the tiny cabin serving as a classroom for the older girls whenever classes could not be held outside. The would not be able to have their own chapel with the Blessed Sacrament for thirty years! They had to spend time each day gathering food for their cooking, and carrying water. The Indians would come into the cabin to watch the nuns so there was no privacy but they learned to accept the presence of the Indians at all hours. Now, at Sugar Creek they only have what they think was the foundation of the log cabin that was built for the nuns about three months after they arrived. It was larger and had a loft. Lucile seems to have picked up the Potawatomi language quickly with the help of two women and within two weeks had taught the Indians canticles in their own language which they sang at Mass. Many of the Indians were devout Catholics and there were many conversions among the tribe. The Indian girls were docile and soon learned to sew, knit, and cook. Before we taught the women and girls how to cook vegetables, they had eaten most of their food raw. The Indian women usually had a pot of corn mash cooking near their wigwams and the Indians just helped themselves when they felt hunger. During the hunting season they would eat meat. These are a few of the facts that I learned that made Sugar Creek a place of pilgrimage as our nuns were real pioneers.
Posted by Helen at 1:08 AM