It is good to be back at Oakwood 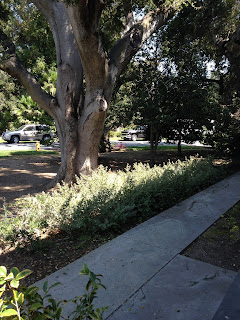 I arrived home safely last night and it was good to be home. I enjoyed being with my family, but really missed Oakwood. Today we are celebrating Mardi Gras and it is also Tippy's birthday. I love being with Tippy and often push her wheelchair back to her room or to the Chapel; I try to keep her informed. She has been on hospice for several months now as she has cancer in her jaw that makes it difficult for her to eat, but she never complains and is a great example for me.

When I left for Arizona, I had my first adventure, if you can call it that. I was supposed to board the airplane at 11:50 but then the sign went up that we would not leave until 1:30. I never hear the announcements so had to go back to the gate often to see what was really happening. People were missing connections and some had small children with them. I was told a part was being sent for and then the airplane had to test it before we could leave. By 3:00 the plane was cancelled and all the passengers were in line to see how they could get out of San Francisco. There was another plane, but it was full so they were sending people to San Jose or the hotel near the airport and promising a 6:00 AM flight or a 9:00 AM one.  I was so tired standing in that line for so long that I told them I might need a wheel chair. The man with the vouchers told me he would come over to talk to me about the options and I should go sit down. I was happy to do that and he did come and wanted to send me to a hotel, but my suitcase was on the plane that was going to Phoenix so I was thinking about the 7"00 PM flight from San Jose if not too late for my brother to meet me. I was not happy with either option and wanted to go back home but the man asked for my boarding pass and then made me a sign to follow him. He took me to the other gate, took me to the plane that was full except for one seat. I got on, the door was closed and we were off. I had just enough time to text John to meet me at 6:00 PM! My sister-in-law changed her mind about cooking dinner for me that night and we all stopped to eat on the way back to Gold Canyon. They have a darling dog that I miss now. I had a great week with them before going to my sister's.
Posted by Helen at 12:00 AM