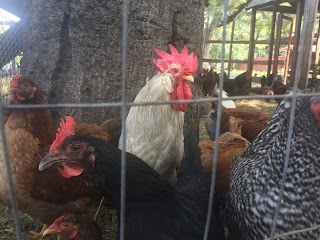 Father Michael Fish, OSB CAM, gave us some poems to reflect on and I am copying one here to share. The picture just is one that Gaby took last Thursday when I was comforting the goat. The poem is by Chase Twichell and is found in Poems of Awakening: An International Anthology of Spiritual Poetry, edited by Betsy Small.

Suddenly it was clear to me--
I was something I hadn't been before.
It was as if the animal part of my being
had reached some kind of maturity that gave it
authority, and had begun to use it.

I thought about death for two years.
My animal flailed and tore at its cage
til I let it go. I watched it
drift out into the easy eddies of twilight
and then veer off, not knowing me.

I'm not a bird but I'm inhabited by a spirit
that's uplifting me. It's my animal, my saint
and soldier, my flame of yearning,
come back to tell me
what it was like to be without me.