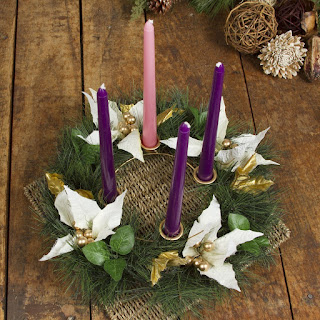 Today's feast was the anniversary of my parents' wedding. They wanted to have a quiet wedding before Advent. My mother did not tell her father; her mother had died when my mother was still a teenager and she knew how upset her father was when she became engaged, plus she really did not want a big wedding. My Dad could not tell his mother as he had five younger sisters and they all would have insisted on a big wedding. Since he was a tennis partner with the Archbishop, Dad asked that the bans not be published and my parents asked a wonderful couple who lived in Kirkwood to we their witnesses. My mother told me that the wedding was at the 8:00 Mass at her parish church and then my Dad went to work and Mother went to her appointment at the beauty shop to get her hair cut! My mother caught a cold and my grandfather would not let my Dad come visit her. He bought a house and knew it would come out in the papers in both of their names and people would know they were married so he told his mother and my mother had to tell my grandfather. I think this was after Christmas. Dad's sisters told him their had to be a honeymoon so he took my mother to Chicago. It seems so strange, but they were such a happy couple and never separated even a single night until my brothers went to Scout camp and Dad went along as an assistant Scout Master. So all this comes back to me on the Feast of St. Andrew.

The important thing to remember about Andrew was that he and his brother, Peter, immediately left their nets and followed Jesus.

It is good to write down whatever we have decided to do this Advent to prepare for the celebration of Christ's coming into our world. Then we will be definite about our Advent preparation. It is a short season, but one that can make a difference in our lives!