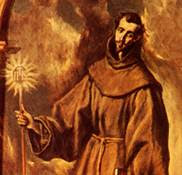 I do not know much about St. Bernardine of Siena. In 1397 after a course of civil and canon law, he joined the Confraternity of Our Lady attached to the great hospital of Santa Maria della Scala. Three years later, when the pestilence revisited Siena, he came forth from the life of seclusion and prayer he had embraced, to minister to the plague-stricken, and, assisted by ten companions, took upon himself for four months entire charge of this hospital. Despite his youth Bernardine proved fully equal to this task, but the heroic and unremitting labour it involved so far shattered his health that he never completely recovered. Having distributed his patrimony in charity, Bernardine received the habit of the Friars Minor at San Francesco in Siena, 8 September, 1402, but soon withdrew to the Observantine convent of Columbaio outside the city. He was professed 8 September, 1403 and ordained 8 September, 1404.

As a Franciscan priest he won many converts in Italy because of his eloquence and intuitive understanding of the needs of his listeners. After refusing various bishoprics, Bernardine became the Vicar General of the Franciscans and was canonized in 1450, just six years after his death!

This coming Sunday, May 25, is the feast of St. Madeleine Sophie, foundress of the Society of the Sacred Heart. Here is a quote from her that I was reflecting on today:
"We don't live among angels but among humans and sometimes we forget it. You know and admire a person but when you discover real faults in her you feel deceived. When this happens to me, in order to keep my peace, I "try to walk in her moccasins" and not judge by appearances." (St. Madeleine Sophie - Letter, May 31, 1828)
Posted by Helen at 6:03 AM