Preparing for Fourth Sunday of Lent 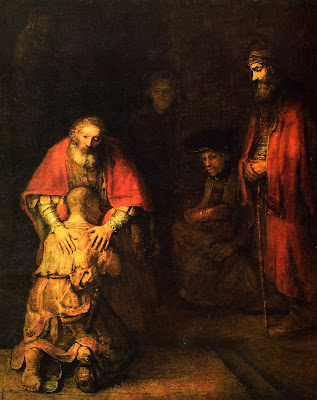 Again, parishes engaged in the Rite of Christian Iniciation of Adults(RCIA)may celebrate the Second Scrutiny today. If so, you may be having the Gospel of the Prodigal Son or the readings from Year A that would have the Gospel of the Man born blind that Jesus cured. Both Gospels tell us much about Jesus.
In Luke 15:1-3,11-32 we have the tax collectors and sinners drawing near to Jesus. But then the Pharisees and scribes began to complain so Jesus addressed to them the parable of the two sons with the loving father. The one son asks for his inheritance and leaves home; he spends it all foolishly and is in dire poverty. He hires himself out to tend swine and is so hungry that he longs to eat the pods on which the swine feed. Finally, he comes to his senses and decides to return to his father and confess that he has sinned and only wants to be treated as one of his father's servants. In the meantime, Jesus shows us the father who has been longing and looking for his son's return. He runs to meet him, embraces him and kisses him. Then he celebrates because his son who was lost has returned.
Then we have the other, older son who, as he returns from the fields, hears the sounds of the celebration and becomes angry when he hears that it is for his brother. He refuses to enter the house and his father comes out and pleads with him: "My son, you are here with me always; everything I have is yours. But now we must celebrate and rejoice, because your brother was dead and has come to life again; he was lost and has been found."
There is always much to reflect on in this Gospel. Let us return to the Father with humility and let him embrace us. If I sometimes have identified with the older son, I ask pardon and rejoice with the Father and my brother. How hard it is sometimes to rejoice in the good fortune of another! Yet, true love always wants the good of the other.
Posted by Helen at 5:42 AM