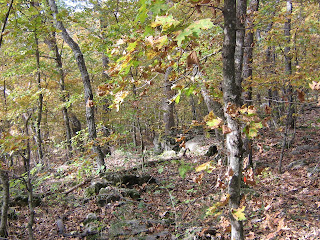 This is a picture of Sugar Creek where St. Philippine Duchesne finally reached the Indians in 1841; because of her age and ill health, she could only be there a year. She prayed long hours as well as sat with any Indian who was ill. I am sure her prayers are what made the Indian Mission such a success for the next decades. When settlers began to push the Indians further to the west, the superior, Lucile Mathevon, lead the way to St. Mary's where the Jesuits had gone ahead to prepare for the moving of the school for boys and the one for girls.
I have been thinking of the courage of our pioneer Religious. They came from France and gladly suffered from all the lack of comfort on the frontier as they began the first free school west of the Mississippi in St. Charles in 1818. They lacked everything that first winter; the Missouri froze and so did the little water they managed to have in the pitchers in the primitive log cabin. We have much to thank our first pioneer Religious for and, of course, Philippine as Superior played a great part in the first foundations in America. She kept us united to the other houses of the Society and now we are in at least 43 countries and all united. Anyone who goes to our schools is also part of the great family of the Sacred Heart so I am just very grateful to Philippine.
I will never forget the many nights I prayed both at the Shrine where she was buried when I was a boarder at St. Charles or at the door of her little cell which was still very much as it had been when Philippine spent the last ten years of her life back at St. Charles!

I am sorry that somehow November 18 was published before November 17th! However, I am trying to schedule ahead as we go to a meeting in New York on Friday and there will not be time to think about writing a blog.
Posted by Helen at 1:00 AM