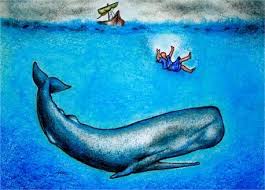 Tomorrow we will be reading about how Johah was told by God to travel to Nineveh. Instead, Jonah boarded a ship going in the opposite direction. As the story goes, a great storm arose and the sailors could not manage in the rough seas. Jonah accepts the fact that he is the cause of this terrible storm and so deserves to perish that the others may live. The sailors then throw him overboard and he is swallowed by a whale. After three days, the whale throws him up on the shore. Now this may just be a story, but the First Reading tomorrow will tell us that Jonah went to Nineveh, according to the Lord's bidding. He begins to announce that the city will be destroyed in forty days. He had only begun to walk through the city when the people believed God and proclaimed a fast, When God saw that they had repented, God did not carry out his threats.
The reading ends with this fact that the people changed God's plan. Was Jonah happy? No. I suggest you go back and read the entire story in the book of Jonah.
Posted by Helen at 1:00 AM