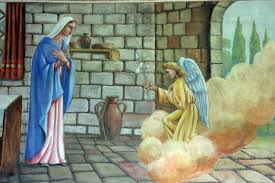 This is such an important feast. The reflection given in "Give Us This Day" for this feast is by Kevin O'Brien, S.J., president of Santa Clara's University. He begins by sayine that "Annunciations occur more often than we think." He talks about a time before he was ordained when he was in Boston which was the epicenter of the sexual abuse scandals. He raised some doubts about his own vocation  to a trusted Jesuit mentor. A few days later he received a letter from him saying: "The people of God need you. The Society of Jesus wants you. And we love you." This was an annunciation and soon his doubts faded. He said that he has used the same words in counseling another young Jesuit. He really believes that God is announcing good news to us. We must be attentive to the angels in our midst.
Posted by Helen at 1:00 AM