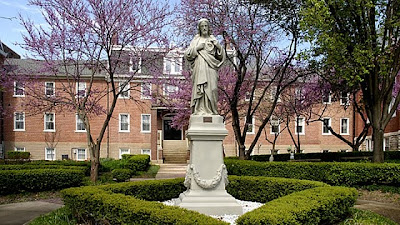 This picture is of the Academy of the Sacred Heart where I first learned about "Noblesse Oblige".
I wrote a blog on Noblesse Oblige and lost it. My frustration then sent me to the Internet.
I am copying here some of my research from two sources on the Internet: Wikipedia, and then from a paper by David R. Murray. Both have deepened my own insight into how we were inspired as children at the Academy of the Sacred Heart in St. Charles by this motto of "Noblesse Oblige" to go forth and help others.
The importance is not the definition of noblesse oblige itself, but an understanding of the strength and power the concept wields over many of the world's most successful business and civic leaders, as well as to gifted ordinary individuals. People who do not consider themselves noble (i.e., the beneficiaries of any special skill, talent, or benefit) may feel no external compunction to excel. Yet, if this concept is taken broadly, each can be seen as having unique skills and talents that we are obligated to make the best use of.
We are all privileged as children of God and heirs of heaven - being a child of the Sacred Heart was also considered to be special and we were to live up to the ideals instilled in us.

Noblesse oblige is a French phrase literally meaning "nobility obliges".
The Dictionnaire de l’Académie française defines it thus:
1. Whoever claims to be noble must conduct himself nobly.
2. (Figuratively) One must act in a fashion that conforms to one's position, and with the reputation that one has earned.
The Oxford English Dictionary says that the term "suggests noble ancestry constrains to honourable behavior; privilege entails to responsibility". Being a noble meant that one had responsibilities to lead, manage and so on. One was not to simply spend one's time in idle pursuits.
Noblesse oblige" is generally used to imply that with wealth, power and prestige come responsibilities.
In American English especially, the term has also been applied more broadly to those who are capable of simple acts to help another, usually one who is less fortunate.
In ethical discussion, it is sometimes used to summarize a moral economy wherein privilege must be balanced by duty towards those who lack such privilege or who cannot perform such duty. Finally, it has been used recently primarily to refer to public responsibilities of the rich, famous and powerful, notably to provide good examples of behaviour or to exceed minimal standards of decency.

Definition
Translated from the French, noblesse oblige means "nobility obligates." Originally, noblesse oblige was used to suggest that certain requirements of behavior could be legitimately imposed upon persons of noble birth. Noblesse oblige in modern English parlance is a broad literary concept. It suggests that anyone who possesses special talents or gifts is required by society to make the best use of those gifts; that he or she is duty-bound to do his or her best.

Today is First Friday. Do check out the Litany to the Sacred Heart that is posted on the Concord Pastor's blog listed on the right. I like it! I have not seen this litany and it makes one feel creative and ready to invent one's own to honor the Sacred Heart.
Posted by Helen at 3:01 AM