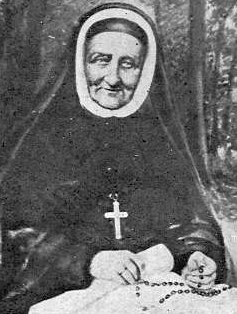 I have been sitting in silence with St. Philippine Duchesne as I ask her what she wants of me this year and what she wants of our new "Philippine Region" that consists of all the Provinces of the Society of the Sacred Heart in North and South America and includes Cuba, Puerto Rico, and Haiti. I have been thinking of Philippine's great desire to go to the Indians, but at the same time, how obedient she was. Her ardent zeal for souls, her intense desire to go work with the Indians, all fueled her prayer, but she kept fidelity to the Constitutions at the heart of all she did. She kept us united to the Society so that we would be one heart and one soul - this union of all the members of the Society is now being expressed in our desire to organize ourselves in this one body in regions. The term is a bit confusing for some as in the United States/Canada Province we have just begun using the term to organize the Eastern, the Central South, and the Western "regions" of the Province. Smaller numbers call us to create new structures but we know that Philippine will watch over this new and vast region named for her and keep us united to the center.
I did not intend to write any of the above so hope it was the Holy Spirit moving my fingers today!