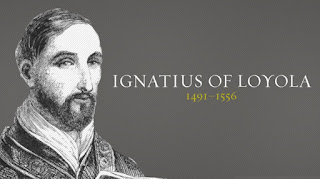 Our Saturday movie was on Ignatius of Loyola. I did not go as I feel that I know Ignatius quite well. I had three Jesuit cousins and as a child I really wanted to be a Jesuit after reading all of Father Finn's books: Tom Playfair, Percy Dee, Harry...etc.

I think no one around here has read these but I found a copy of Tom Playfair in Spanish when in Chile.

To go back to Ignatius, I had the joy of making the 30-day retreat in Manresa where he actually wrote the Spiritual Exercises. We would get up at night to go pray in the cave and I spent the entire last night there. I followed his footsteps in Barcelona and Montserrat; I went back and gave the 30-day retreat to priests three years later and then, when teaching one summer in Spain, I went to Loyola to see where Ignatius was born and the room he had when he was recovering from the cannonball that had shattered his leg. That was the time of his conversion. I have taught his life, given perhaps over 100 Ignatian retreats and made many, too; I have read and studied what he wrote, his Exercises, the Constitutions, his letters and so I did not go to the movie, but do think back over some of the graces received during the complete Exercises. I have had the grace of making at least five 30-day retreats, but only three of them were based on the complete Exercises of St. Ignatius and given by Jesuits. My favorite prayer is the one that begins,
Lord, teach us to be generous, to give and not to count the cost, to labor and not to seek a reward, to toil and not to ask for rest, to fight and not to heed the wounds, (sorry but I guess I do not remember this but I used to say it.)