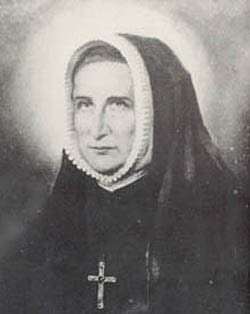 Next week, on November 18, we celebrate the feast of St. Philippine Duchesne. She was a great pioneer saint and I want to share with you an excerpt written by Jane Cannon who is the alumni director at St. Charles. Some of the alums, including myself, adopt one of the eighth graders each year and write to them for the feasts that are celebrated by children of the Sacred Heart all over the world. Here is what Jane has summarized about the beginnings of the present Academy of the Sacred Heart:

"Starting Over in St. Charles"
The Religious of the Sacred Heart were only in St. Charles for one year (1818-1819) and then moved to Florissant, where they stayed until 1828, when the Jesuits invited them to come back to the log cabin, which was situated near the new stone church that the priests had built. This is what happens the day they came back.

Mothers Duchesne, Octavie, Mathevon and O'Connor got up at 3:00 a.m. to prepare for their trip to St. Charles. Bishop Rosati had arrived from St. Louis on horseback and joined them in time to board the ferry for the trip across the river. They caught site of St. Charles by eight o'clock.

As they walked up the street from the river toward the log cabin (Duquette Mansion) the women of the town looked out the windows of their houses and waved to welcome them. One lady dance in the street and cheered for their arrival. Others were at home preparing dinner for their welcome.

When they reached the cabin a man accompanying them crawled through a window to open the door since there was no lock on the door. Here is how one of the nuns described their new home: 'The house was built of poor boards, badly joined and offering no exterior attractions. Six rooms, or rather six hovels, without windows, without flooring, without doors, composed our little palace. A cave basement under the hours was the abode of all the animals of the village. The sheep, the pigs, etc. found their place there regularly and made human sojourn in the house intolerable by the odors which came up from their hovel.'"

This will be continued tomorrow as I think it makes us admire what the first Religious went through to establish a school that is still educating children today!
Posted by Helen at 6:34 AM