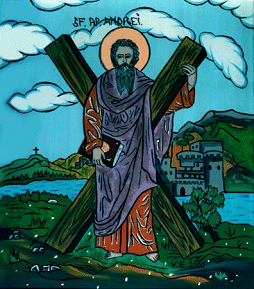 Scotland - Saint Andrew
Saint Andrew is the Patron Saint of Scotland. He was born in Capernaum and was a fisherman on the Lake of Galilee. Together with his older brother Peter he became one of Jesus' first disciples.
After Jesus' resurrection Saint Andrew made many journeys by land and sea, teaching and preaching. He died for his faith, although just where and when is not certain, but he was crucified on a diagonal cross because it is said that he did not feel himself worthy enough to suffer on a cross the same shape as his Lord.
Many years later his bones were brought to Scotland for safe keeping and were buried in a shrine where the town of St. Andrews now stands. I took this information from the Internet. I know he was one of the first two who followed Jesus and he was the one who recruited Peter. He was one of the twelve apostles and so has had his own feast. It is sometimes just before Advent and it was the wedding anniversary of my parents.
We can ask Andrew to help us prepare for the Lord's coming this Advent. He was a disciple of John the Baptist who came to prepare the way of the Lord!
Posted by Helen at 3:47 AM