Birthday of the Society of the Sacred Heart 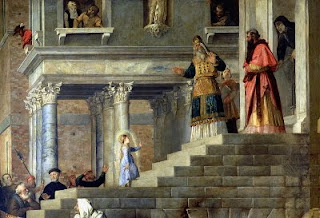 The Society of the Sacred Heart celebrates the Presentation of Mary in the temple. The Feast is celebrated on November 21, and is considered the birthday of the Society of the Sacred Heart as St. Madeleine Sophie and her first companions made their vows on that day.
I had never heard about the tradition that little Mary was presented in the temple as a very young child until I went to the Academy of the Sacred Heart in St. Charles and one of the little ones was dressed in a long white dress and went up to the altar in our Chapel and the picture has stayed with me. I suppose this happened every year but it fed my imagination to wonder how Mary felt, what really was going on inside of her, what her life was like in the temple, etc. Then, when I entered, I found out that the Society celebrated its founding on this day and the young nuns (we used to be called Aspirants until our final profession about five or six years after first vows) had a three-day preparatory retreat in the midst of our ordinary work; sometimes a Jesuit came and gave a talk to the entire community but often it just meant that we would be with the Superior each evening for some spiritual conversation or special conference to prepare us to renew our vows on the Feast. This was just a renewal of devotion, but it was a great help to have some special attention in the community at this time of year when the work was heavy and the sun set early.
So, I am busy thanking the Lord for all the Feasts I remember as one of those young nuns and will make my own preparation tonight for the Feast as we are going to a lecture at Barry University.
Posted by Helen at 2:26 PM