Convent of the Sacred Heart in Montreal 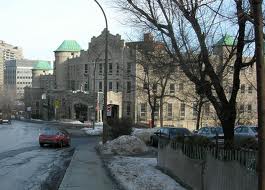 It seems that we are now located in the heart of the city, but this was the sixth location, I think. I know that the boarding school at St. Vincent opened in 1846 with sixty-four students. Most of them had been with us in St. Jacques. The parents could visit weekly but still had the difficulty of having to cross the river to be able to see their children and they began to be very active about getting a bridge built. Mother Hardey visited in 1848 and installed Mother Amalie Jouve to replace Mother Sallion. By 1852, St. Vincent had an academy of more than 80 pupils, a junior school of 25, and a growing novitiate.Mother Jouve was needed for the southern vicariate and Mother Angelique de Monestrol replaced her. Then trouble arose as we were apparently considering moving the school to the island of Montreal. This decision came from the Mother General with the advice of Mother Hardey so in 1858 all was turned over to the Sisters of Providence. In the meantime, foundations for the new convent at Sault began with the laying of the cornerstone on August 17, 1856.

Well, this history is fascinating but to be continued as I want to share a prayer from Philippine Duchesne as we will be celebrating her feast on November 18.

Lord, I lean on You alone for strength. Give me your arm to support me, your shoulders to carry me, your breast on which to lay my head, your Cross to uphold me, your Eucharist to nourish me.
Posted by Helen at 2:30 AM

I HAVE THE STAR OF THE MORNING PAINTING FROM YOUR MOTHER MARGARET Mary. It is beautiful I have been crying allday over her. It is original oil paint. I will send you a picture if you tell me your email address. Thank you and god bless.
Darleen Ewell

My great-grandmother Ellen (or Aileen) Shaw attended the Convent of the Sacred Heart from about its inception until 1854 Is there any chance that records remain of those early pupils?
Shelagh Nation (in South Africa) My e-mail address nation@sandveld.net