Canada in the spring 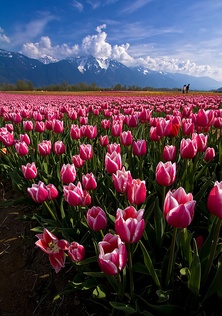 This picture is so beautiful that it makes me want to plan a trip to Canada. In the meantime, I am fascinated by the history of the Society of the Sacred Heart in Canada. I will continue to share something of this as it helps to reflect on the way God uses us through history. I will continue today to quote from the house journal cited in Mother Callan's "The Society of the Sacred Heart in North America." It seems that the day school with its 150 children in 1844 was "formed of very ignorant children, even in what regards religion, and the parents know little more than the children. To combat this ignorance, Mother de Kersaint, who is Mistress General of the free school, has opened a class for the women of the neighborhood, giving interesting instructions every Sunday afternoon, and during the first year the attendance averaged about fifty."
Then comes praise for the pastor who is a saint. He seems to have provided the nuns with everything and kept increasing their property. He had promised "four arpents of land. Shortly after our arrival, we were informed that we owned twenty. At the end of some months the pastor asked Reverend Mother Sallion to go with him to visit a farm which he wished us to accept. Then he spoke of another piece of property, and along with it a pretty stretch of timbered land. Here at the end of 1843, we own 360 arpents of land, varying in worth, some quite valuable, some less so."
Mother Sallion is ill in the spring of 1844 when Mother Hardey arrives from New York with several religious. Mother Dumont is left in charge of the house as Mother Sallion is named treasurer general for the American convents and accompanies Mother Hardey and Mother Cutts on the visitations of their respective vicariates as we were not really provinces. The house journal speaks of being "buried in the depths of Canadian snows so many months of the year", but adds that they are never without spiritual help for the Jesuits "are kind and devoted friends." Then it tells us that four of the pupils have entered the novitiate and Mother Sallion returned in November.
It also tells us that it takes about twelve hours to reach the convent from Montreal and so parents are reluctant to send their children and the boarding school has disminished. They are looking for a place in Montreal.
Posted by Helen at 2:30 AM