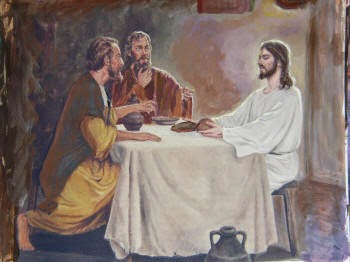 We pray together every Sunday night and I am sure Jesus is with us. He does like to be invited though and I sometimes forget this.
Here is a commentary from John Kavanaugh (to read more, go to the Concord Pastor's blog and click on the picture of the Bible):

It’s a lovely Easter story that the Gospel of Luke gives us. Here we have two people who seem to think everything is over. They have just experienced a great loss.

Not only have they left the community, they don’t place much credence in the testimony of the women who heard angels declaring Jesus alive. Other witnesses saw the empty tomb, but not Jesus. Perhaps that is why they are walking away.

Observe what is going on here. We have two people who seem to be in a situation of unbelief, hitting the road, leaving their community, deep in confusion.

Two things happen. One, they are joined by Jesus on the road. He actually walks with them in their loss of hope and in their bewilderment. Two, he asks them to tell their story, and he stays to have dinner with them.

Even when he chides them for their weak faith and goes through the scriptural promises of the messiah, they are not in a state of full belief. They have yet to recognize him. Only with the breaking of the bread are their eyes opened; and at that moment of recognition, he vanishes from sight.

Imagine this incident as a metaphor of how God deals with someone who has gone away or lost the way, an image of how we could deal with each other in our unbelief.

With the breaking of the bread, the two wayfarers are brought into communion, even though they have not fully acknowledged the mystery that beckons them.

The story of the disciples on the road to Emmaus presents a strange state of affairs indeed.
Jesus was more with them on their journey, even in their doubt and unbelief, than when they actually saw and recognized him and finally believed.

And it was only in retrospect that they could see that their hearts were enkindled as they were walking and talking on the road—even though they did not know that it was he who was explaining the scriptures to them.
I find this paradox of faith, of distance and closeness, of belief and unbelief, repeated over and over again in people’s lives. Although I cannot see when or if it happens to me, it is startlingly clear when I witness it in others.