One of my favorite Gospels is this Sunday's 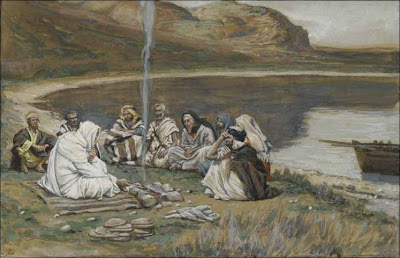 Today the Gospel is from John 21. Peter announces that he is going fishing and his friends, most of the apostles, all chime in and say they will go with him. They spend the night out on the lake and catch nothing. Then they see someone on the shore who calls out to them to ask if they have caught any fish. They tell him that they have toiled all night and caught nothing. He tells them to cast the net again and they obey and the net is so full they fear it will break. Then comes the recognition: "It is the Lord" and then Peter cannot wait but gets out of the boat to go to Jesus. In the meantime, Jesus has fixed breakfast for his friends. I think that is such a kind and thoughtful service; they are tired and hungry and probably cold and wet and here is Jesus on the shore with a fire waiting to serve them the fish and bread he already has on the fire and he is going to add more of the fish they bring ashore. Imagine how they feel when they, still rather awestruck with the huge catch of fish and, no doubt, remembering the first catch of fish that made them leave all and follow Jesus who said they would be fishers of men, come and find Jesus has not only prepared breakfast for them but wants to serve them. That scene is one I love, but what follows touches me even more. Jesus asks Peter three times if he loves him and loves him more than the others. Peter finally cries out, "Lord, you know everything; you know that I love you!" That phrase is one that I often repeat and I suspect that I have the same intensity as Peter had after having breakfasted with the Lord!
Posted by Helen at 3:35 AM