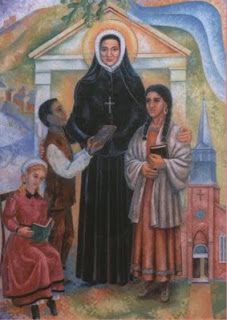 If I am writing about Philippine it is not only because I love her, but she is a saint that is little known in the United States.
She is the first female saint west of the Mississippi and was canonized in 1988. To continue where I left off last Friday, St. Madeleine Sophie had arrived at Grenoble and Philippine, although ten years older than Sophie, became her dear daughter and was eager to receive the training given by Sophie.
The novitiate was formally opened on the last day of 1804; the work of the two small schools had to carried on as there were now seventeen boarding pupils and twenty in the free school. This was not allowed to absorb more time than necessary as Mother Barat was initiating her novices in prayer and the interior life, so characteristic of this new Society.  Philippine soon found that her desire to go convert the Indians continued to influence her prayer and she was open about this with Mother Barat who did not discourage her, but told her that it was not going to happen soon and she must be patient.  Philippine made her first Vows and her final profession still at the convent in Grenoble, but in 1815 she was a member of the General Chapter which met in Paris. She was never to return to her beloved convent in Grenoble but stayed in Paris to establish a house there. However, her missionary desires did not weaken and a visit from the Bishop in charge of the Louisiana territory gave her the opportunity to again plead to be sent to the missions. Mother Barat had told the Bishop that it was too soon for her to send missionaries, but Philippine arrived in time to beg her to consent. She relented and said she would set about seeking companions to go to America with Philippine.