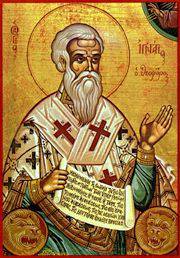 Today is the feast of St. Ignatius of Antioch. He was both a Bishop and Martyr in the early Church. He wrote seven letters which are important still. He went willingly to his death in Rome, but his journey in chains took him through Asia Minor and he was able to strengthen the faith of early Christians as he went. He said: "We have not only to be called Christians, but to be Christians."

His seven epistles form part of the Apostolic Writings of the early Church.