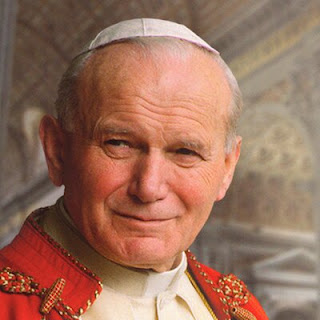 We have good memories of this Pope who was canonized soon after his death. John Paul II was one who started a revival with the Catholic youth and I am sure he is still watching over our Church and praying for all who have suffered under the different aspects of clericalism, and especially for all those who have been abused by Catholic priests and Bishops and for all those who had a part in covering up the sins of the ordained ministers.

I loved John Paul II but feel that Francis is the Pope we need now and I count on St. John Paul II to help Pope Francis now as he tries to reform many things needed today in our Church.

Now, for a word about our wonderful western regional meeting last week end - I will write more later, but just want to say that it was a great grace for me to be the facilitator for a table of 6 with five different nationalities: African, Korean, Chinese, Japanese, and American; to hear each one speak of racism was so helpful and I finished this week end full of gratitude.