Preparing for the Feast of St. Philippine 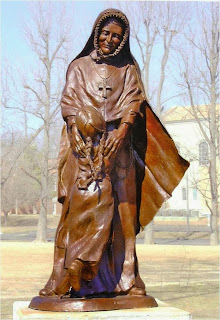 As we prepare for Philippine's Feast, I am remembering the great spiritual friendship that I had with a young Spanish Religious of the Sacred Heart who arrived in Chile just one year after I had arrived. At the time, I was Dean of Students and so working with the High School and she took over the youngest classes. We were the only "young professed" and so we were often sent off to have a visit together on Sundays and so became quite close. She had the idea, since we were two missionaries, of making a novena before the feast of Philippine and taking something that was hard for us to do as a practice to prepare her feast. It was a real spiritual help for both of us and we did it each year until she returned to Spain after her father's death. We only lived together for a year or two and then she was sent to Santiago to have a lung removed and I was asked to head the grade school. I really do not remember the practices we did before the feast, but I do remember that we found it very helpful and sharing on our efforts made us great spiritual friends. She died a few years ago and it was a real loss for me. I actually managed to visit her in Palma de Mallorca three different times when I was in Europe.
This statue sits at the corner of the convent of the Sacred Heart in St. Charles down by the playing fields; it looks out on all who pass by and captures something of the tenderness of Philippine.
You can see her shrine in the background - built after I was at school.