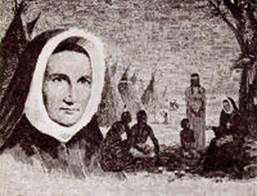 Philippine had a missionary vocation. She wanted to convert the entire world. After talking with others who had been in America, Philippine began to desire ardently to go there to convert the Indians. When she spoke of her desire with St. Madeleine Sophie, she was both encouraged and told she must wait. The right moment came in 1818 when Bishop DuBorg came to plead for Religious of the Sacred Heart to come and establish a school in his extensive diocese. Philippine was ready, eager, and full of courage. She kept these qualities through all the hardships of the voyage, the very poor beginning in St. Charles instead of St. Louis where she had hoped to be and through years of hard work, prayer, and struggle while she bravely made foundations at Grand Coteau, Florissant, St. Louis, and St. Charles to say nothing of two other foundations in the South. She welcomed the Jesuits, helped them, and longed to go to the Indians. Finally, that wish was granted and she left with the first band to go to the Jesuit mission in Sugar Creek; at that time it was Indian Territory but became Kansas later. Her health was a concern but the Indians loved her and called her "the woman who prays always." She was there for them and they knew it. Her dream of going to the Indians was finally realized. She spent long hours in prayer or sitting by a sick Indian. She was content but others worried about her facing the extremely cold winters in the little log cabin and she was sent back to St. Charles.

I am writing this as some may not know about our Saint Philippine Duchesne and she is worth knowing. The
last ten years of her life were at St. Charles and they still talk about how she would go through the children's dormitory at night to see that all was well and mend any clothes that needed it. She taught Catechism to some of the poor children in a little room under the front steps of the convent. Her own room is still preserved and one can see how poor and small it is. Her spirit remains there and I urge those who have not been able to visit this place of pilgrimage to make an effort to do so this year. It is now only about fifteen minutes away from the St. Louis airport - new highways and bridges have made St. Charles much more accessible. In Philippine's time the bridge had not been built and it was a long carriage ride into St. Louis. Even when I was a boarder there was only the old bridge and St. Charles Rock Road to get us to school.
Well, I hope you do not mind this rambling and will learn to pray to Philippine and, especially, become a prayerful person following her example.
More tomorrow, the real Feast day now, but it used to be November 17th before her canonization so I still celebrate both days!
Posted by Helen at 2:00 AM