Feast of the Nativity of John the Baptist 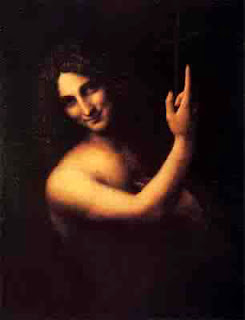 The artist of this picture of John the Baptist is Leonardo da Vinci and it was painted between 1513-1516.

Since the Feast of the Nativity of John the Baptist falls on a Sunday this year, it is an indication of his importance that his birthday liturgy replaces the Sunday liturgy. John the Baptist is the only birthday celebrated besides those of Jesus and Mary in the liturgical year. Let us look at the Preface for today's feast to see what makes John so important. (Having his own preface also makes him special).

The Preface of John the Baptist points out:
1.He was the prophet who "prepared the way of the Lord."
2.He was set apart and his birth brought great rejoicing; even in the womb he leapt for joy, so near was man's salvation.
3.He was chosen from all the prophets to show the world its redeemer. "Behold the Lamb of God".
4.He baptized Christ, the giver of baptism ...
5.He was "worthy of a martyr's death, his last and greatest act of witness to your Son."
The Preface gives us these five great reasons to honor St. John the Baptist. He was a humble prophet who prepared the way for Jesus and said "I am not worthy to unfasten the sandals of his feet." He also was fearless in his preaching and lived a counter-cultural life.
Posted by Helen at 6:31 AM

My husband has started a blog where we can read the next Sunday's readings and commentary in order to better prepare for Sunday Mass. When we went to Mass and the readings were not the same as those we prepared, I was a little more than confused. Your post has cleared up that confusion. Thank you.