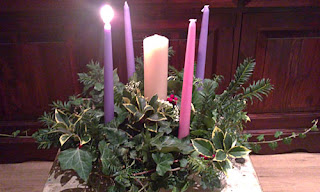 This year we will have four full weeks before Christmas. There are always four Sundays is Advent; because Christmas is on a Sunday this year, we have the full 28 days of Advent to prepare for the coming of the Lord Jesus. In many homes and Churches, there is an Advent wreath that has four candles and one is lit each week of Advent until all four are burning to announce the coming of our Savior as a helpless infant. No one fears an infant so let us prepare to receive Him again into our hearts and lives.

The four candles represent the four weeks of Advent. A tradition is that each week represents one thousand years, to sum to the 4,000 years from Adam and Eve until the Birth of the Savior. Three candles are purple and one is rose. The purple candles in particular symbolize the prayer, penance, and preparatory sacrifices and goods works undertaken at this time. The rose candle is lit on the third Sunday, Gaudete Sunday, when the priest also wears rose vestments at Mass; Gaudete Sunday is the Sunday of rejoicing, because the faithful have arrived at the midpoint of Advent, when their preparation is now half over and they are close to Christmas. The progressive lighting of the candles symbolizes the expectation and hope surrounding our Lord’s first coming into the world and the anticipation of His second coming to judge the living and the dead.
The light again signifies Christ, the Light of the world. Some modern day adaptions include a white candle placed in the middle of the wreath, which represents Christ and is lit on Christmas Eve. Another tradition is to replace the three purple and one rose candles with four white candles, which will be lit throughout Christmas season.
Taken from Father Saunders on Advent wreath.
Posted by Helen at 1:00 AM