Thursday within the octave of Easter 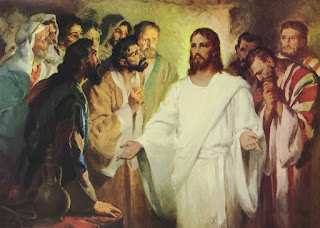 The Risen Jesus had a busy Sunday; I am sure He went to show Himself first of all to his mother.

Mary would not be startled as she had kept all his words and pondered them in her heart. It was a consoling visit.

Then Jesus showed himself to Mary Magdalene who at first did not recognize the Risen Jesus. She did as soon as He called her by name.

He also seems to have appeared to Peter, but we do not have details of that appearance.

Jesus also went to join the two of his disciples who are leaving Jerusalem for Emmaus but who seem to be discouraged and without hope as they know that Jesus was crucified, died, and was buried in a tomb. They did hear that the women had said that Jesus had risen, but they did not pay much attention to the tale of the women. When Jesus joins them, they do not recognize Him until He stays with them for supper and they know Him in the breaking of the bread.

Then Jesus goes to his chosen disciples who are in a locked room that Sunday night. Thomas is not with them. They are despondent and confused. They are pondering the stories of Jesus appearing during the day, but they find this beyond belief as their faith cannot make sense of what has happened and they do not seem to believe all that Jesus told them about how He was to suffer and die but would rise on the third day. They are afraid and so are gathered behind locked doors. The Risen Jesus appears in their midst and greets them with "Peace be with you." They thought they were seeing a ghost and are terrified. Jeus shows Him his hands and his feet and then asks them if they have anything to eat. They give him a piece of baked fish and he ate it in front of them. Then, Luke tells us, that He opened their minds to understand the Scriptures.

Let us stay with the Risen Jesus today and be attentive to the different ways we may experience His presence in our lives.